Welcome to A Different World Wiki 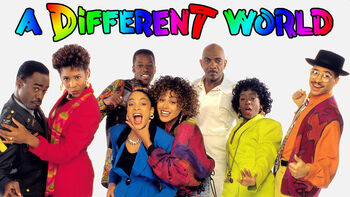 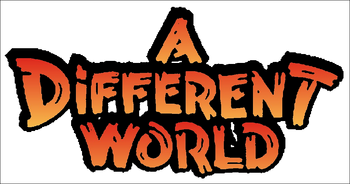 Welcome to the A Different World Wiki, which is dedicated to the popular NBC-TV sitcom series A Different World, the spinoff of the popular sitcom series The Cosby Show, that aired for six seasons and ran for 144 episodes, on NBC-TV from September 24, 1987 to July 9, 1993. The series originally centered on Denise Huxtable (Lisa Bonet) and the life of students at Hillman College, a fictional historically black college in Virginia. It was inspired by student life at historically black colleges and universities.

Denise Huxtable enters her sophomore year at Hillman, alma mater of her parents and grandfather, where she moves into Gilbert Hall and shares a dorm room with 26-year-old Jaleesa Vinson and talkative new roommate Maggie Lauten. Also included in the first season cast were obnoxious and extremely wealthy dormmate Whitley Gilbert, ladies' man Dwayne Wayne and dorm director Stevie Rallen. Lettie Bostic later replaced Stevie as the new dorm director. At the end of the first season, Denise would return home (and to The Cosby Show) after dropping out of college.

In the fall of 1988, new students Freddie Brooks and Kim Reese entered Hillman College. Freddie was a "hippie-child" who developed a crush on Dwayne; and Kim, an aspiring med student, became Whitley's new roommate. Giving Dwayne a hard time was his math professor, Colonel Bradford Taylor. Also, Ron Johnson and Walter Oakes became regulars in the second season after appearing occasionally during the first season. Vernon Gaines, chef at the campus hangout, The Pit, became a regular in the third season. Whitley and Dwayne began an on-again off-again relationship before they became married at the end of the fifth season.

Go to these sites for info or for help with your own wiki!

Retrieved from "https://differentworld.fandom.com/wiki/A_Different_World_Wiki?oldid=5321"
Community content is available under CC-BY-SA unless otherwise noted.